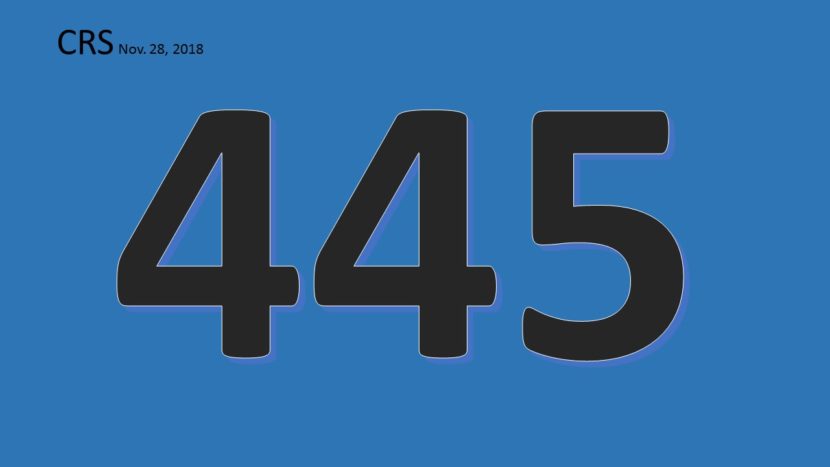 A new Express Entry draw held November 28 has now pushed Canada ahead of the number of invitations issued at this same point in 2017 — a year that set the current Express Entry invitation record of 86,023.

Today’s draw issued 3,900 invitations to apply for Canadian permanent residence(ITAs), bringing the 2018 year-to-date total to 82,000. The minimum CRS score was 445, a decrease of four points over the previous Express Entry draw on November 15, which had a CRS minimum of 449.

Immigration, Refugees and Citizenship Canada (IRCC) is now only 4,024 ITAs away from breaking last year’s record total with another month to go in 2018.

On average, IRCC holds two Express Entry invitation rounds a month, and it has issued 3,900 invitations in six of the last seven all-program draws held since September 5. If this trend continues through December, IRCC will surpass its 2017 ITA record of 86,023. Today’s draw occurred less than two weeks after the previous draw on November 15, which likely contributed to the CRS minimum dropping by four points. When less time is allowed to elapse between draws, fewer candidates have a chance to enter the Express Entry pool and this can have the effect of lowering the minimum score.

The inverse is also true, as we saw in November 15 draw — more than two weeks elapsed, allowing more candidates to enter the Express Entry pool, and the CRS minimum rose to 449. Express Entry candidates who are looking to improve their CRS score can potentially do so in a number of ways, including a nomination through an Express Entry-linked Provincial Nominee Program (PNP) stream.

A provincial nomination through an Express Entry-linked stream is the most valuable factor under the CRS and results in an additional 600 CRS points, which effectively guarantees an invitation to apply for Canadian permanent residence.

The nine Canadian provinces and two territories that participate in Canada’s PNP all have at least one immigration stream that is linked to the Express Entry system.

Under Canada’s updated multi-year immigration levels plan, IRCC has a 2018 admissions target for its Federal High Skilled immigration category of 74,900 new permanent residents. The majority of candidates admitted to Canada through the Federal High Skilled category have their applications for permanent resident status processed through the Express Entry system.

Kevin is 35 years old and holds a master’s degree. Although he has never worked or studied in Canada, Kevin has been working for four years as a consultant overseas. He obtained CLB 10 in the listening, speaking and reading categories of the CELPIP exam and received CLB 9 in writing. His CRS of 445 would have been sufficient to obtain an ITA in today’s draw.

Lola took the IELTS exam, and obtained a score of 7 in all categories except listening, for which she received a 9. Pedro on the other hand, took the CELPIP exam, and received CLB 6 in all categories. Lola applied as the principal applicant and their CRS score of 445 would have been sufficient to receive an ITA in the November 28 draw.