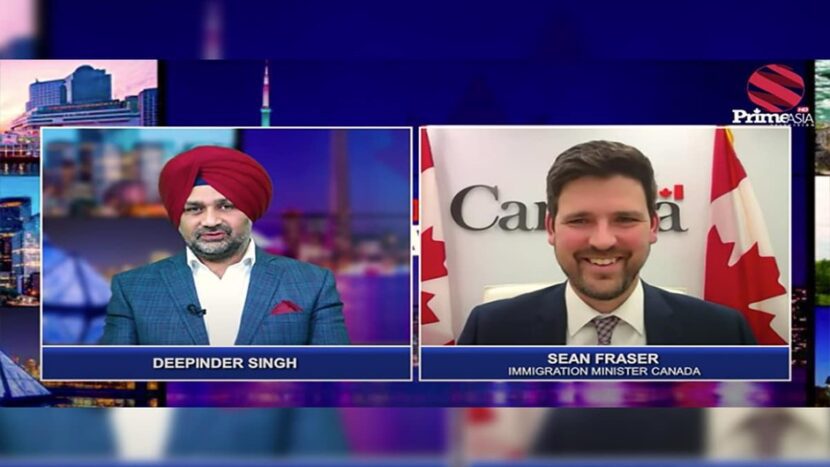 The interview covered a number of topics relating to challenges brought on by the pandemic and possible solutions for the future. Among other things, Fraser spoke about his mandate to support immigration pathways for international students and temporary foreign workers, and the Parents and Grandparents Program (PGP).

Singh began the interview asking about the backlog of 1.8 million people waiting to get a decision on their applications to Immigration, Refugees and Citizenship Canada (IRCC). He noted that the impending applications are enough to exceed the current immigration targets for this year. As per the 2021-2023 Multi-year Immigration Levels plan, Canada is expected to land 411,000 newcomers this year, although that could change when the new targets are released in February.

Fraser said the problem began with the pandemic. In order to exceed their 2021 target of 401,000 newcomers amid travel restrictions, Canada had to land people who were already in the country. He also noted that there was an increase in the number of people who applied to come to Canada. As a result, they ended with two normal years worth of applications in the inventory, but it does not mean IRCC will not consider new applications.

Given that there have been no Express Entry draws for Canadian Experience Class (CEC) candidates since September, people who would normally be eligible to apply for immigration are seeing their temporary statuses expire, forcing them to quit their jobs or even leave Canada. Federal Skilled Worker Program (FSWP) candidates, who are largely outland candidates but also inland, have not had a draw since December 2020.

Fraser did not say if there were any work permit extensions being made for these candidates. He did reference his mandate letter, which calls for him to find pathways to permanent residence for international students and temporary foreign workers. He said there have been no final decisions on what those different programs will look like.

Fraser said the pause in FSWP draws is temporary, and that Canada does intend to resume draws for this program. He did not give a timeline.

He also said he was interested in exploring new ways to make it easier for international students to consider their studies a “springboard” to Canadian permanent residency.

“There’s some work that needs to be done to get there, but I’m committed to doing that work,” Fraser said.

It has been recently revealed through an internal memo that some Express Entry candidates could wait up to 20 months, almost three years, to get a decision on their file.

In response to Singh’s question on the topic, Fraser said, “to suggest everyone is going to be waiting three years is not a fair assessment.”

Fraser said that the government would continue to to have  Provincial Nominee Program (PNP)-specific Express Entry draws.

Fraser noted that Canada is short one million workers, and that 100% of labour force growth comes from foreign workers.

The issue of slow work-permit processing is one of the five areas covered in Canada’s $85 million budget to improve the immigration system. Fraser also says he anticipates the Trusted Employer Stream will reduce barriers for employers that have a good track record of hiring foreign workers.

Fraser confirmed there were plans to allow more foreign health care workers move to Canada. He said the issues is important as there are currently only three health care workers for every senior in Canada, and the labour shortage issue will only keep growing.

He said Canada is prioritizing the processing of foreign health care workers, an initiative which started doing during the pandemic.

Fraser also said that some of the other options they have is to work with the PNPs, and improve foreign credential recognition.

Fraser called the PGP his biggest challenge as immigration minister.

“One of the thing that makes this the most challenging stream is the demand we have given the spaces that are traditionally available,” Fraser said.

The immigration minister said in a given year there are about 200,000 applicants applying for some 10,000 spaces.

In 2020 and 2021, the PGP was once again a lottery system. Critics say the lottery system is unfair to those who have been waiting in the pool of candidates for years. In defence of the lottery system, Fraser said, “although it does not work out for everyone it does put everyone on equal footing.”

Fraser said he is actively seeking feedback from colleagues, but did not say one way or the other if the methodology would change for PGP applications this year.