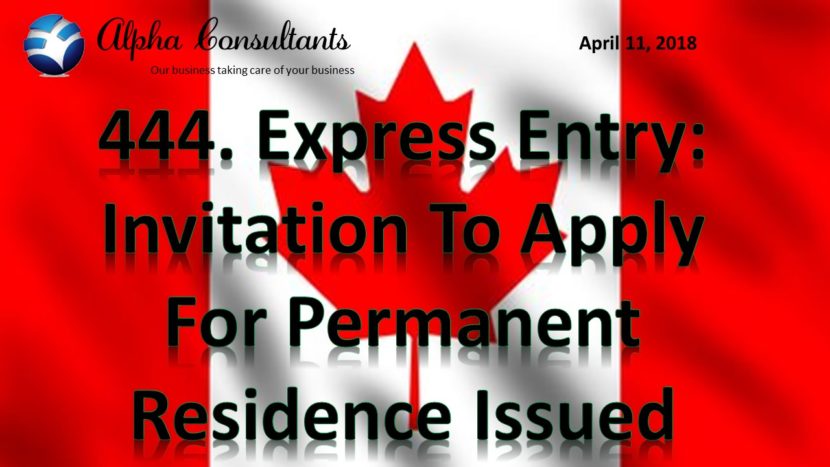 Immigration, Refugees and Citizenship Canada has issued 3,500 invitations to apply to candidates in the Express Entry pool in a draw that took place on Wednesday, April 11.

The minimum Comprehensive Ranking System (CRS) score required to obtain an Invitation to Apply (ITA) during this draw was 444.

Today’s draw broke the recent trend of 3,000 ITAs being issued, which was also the case in the four previous draws going back to February 7. The Government of Canada has issued 21,000 ITAs since the start of 2018. Immigration, Refugees and Citizenship Canada (IRCC) applied the tie-break rule in the April 11 draw. For this invitation round, the time and date of the tie-break was March 26, 2018 at 08:25:40 UTC. This means that all candidates with a CRS score above 444, as well as those candidates with scores of 444 who submitted their profile before this time, received an ITA. To enter the Express Entry pool and be assigned a CRS score, individuals need to be eligible under one of Canada’s federal economic immigration programs: the Federal Skilled Worker Class (FSWC), the Canadian Experience Class (CEC), or the Federal Skilled Trades Class (FSTC).

According to targets set in Canada’s multi-year immigration levels plan for 2018-2020, the federal government set a target of 74,900 admissions for the three economic immigration classes administered through the Express Entry system. The April 11 draw was the largest draw of the year.

Larger draws, like the one conducted today, may help the government reach its higher Express Entry admission targets for 2018 and 2019.

How the Government of Canada will continue working towards the 2018 and 2019 targets remains to be seen. It could mean larger draws or more frequent draws, or some other approach.

Looking at last year, April 2017 was one of the busiest months for Express Entry with three draws and a total of 11,341 ITAs issued. The lowest CRS minimum cut-off score last April was 415.

In the first quarter of 2018, various Canadian provinces have made use of their Express-Entry (or ‘enhanced’) PNPs. With a provincial nomination, Express Entry candidates obtain an additional 600 points toward their CRS score, leaving them well-positioned for an ITA.

Learn how Canadian provinces have been utilizing their PNPs to select Express Entry candidates and meet their annual admission targets.

The following hypothetical scenario illustrates how a candidate could have obtained an ITA during the April 11 draw:

Mickael is 35 years old, has a Master’s degree and has been working as a software engineer for 5 years. He wrote the IELTS and scored an 8 in each category. While Mickael has never worked or studied in Canada, his CRS score of 445 would have been sufficient to obtain and ITA during the April 11 Express Entry draw.

“Even though this draw was more than 2 weeks after the previous draw, the larger draw size still helped reduce the minimum CRS score required.”