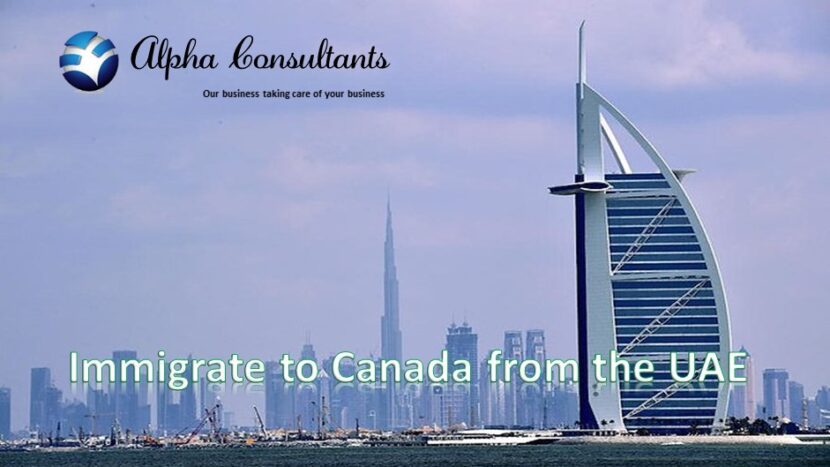 Immigrate to Canada from the UAE

Canadian immigration options for people living in the Emirates.

If you are living in the United Arab Emirates with your eyes fixed on the northwest, here are some of the pathways you can take to get Canadian permanent residency— which may eventually lead to citizenship.

In this article, we hope to show you some options for economic and family class immigration, as well as your work and study options. There are more than 100 economic-class immigration programs, including the Express Entry-managed programs, Provincial Nominee Programs (PNPs), and others.

Keep in mind, even the fastest immigration programs can take months between the time you apply and the time you land. Although Immigration, Refugees, and Citizenship Canada (IRCC) posts estimated processing times on its website, actual processing times may differ, especially since the pandemic created a backlog in applications.

The application fees are also listed on the IRCC website. Prepare to incur hidden costs for a language test, a medical exam, and others.

The best program for you will depend on your professional experience, and your goals. Here are some of the programs available so you can start making your Canadian dream a reality.

If you are eligible for one of these programs, you can enter your information into the Express Entry pool of candidates, and get a score based on the Comprehensive Ranking System (CRS).

You get points for your age, education, language ability in English or French, and skilled work experience. IRCC determines what is “skilled” work based on the National Occupational Classification (NOC) system. Occupations that fall under skill levels 0, A, or B are considered skilled and therefore eligible for CRS points.

The highest-scoring candidates are invited to apply for Canadian permanent residence through regular rounds of invitation.

There are two types of PNPs: “enhanced” programs, which are aligned with Express Entry; and “base” programs which operate independently.

Enhanced programs pull from the Express Entry pool of candidates. If you receive a provincial nomination through one of these PNPs, you get 600 CRS points added to your overall score. This award will push you to the top of the pool, priming you to receive an ITA in a subsequent Express Entry draw.

Base PNPs can be an option for people who are not eligible for Express Entry. To immigrate through a base PNP, you apply to the province, and if you are eligible, get a nomination. With your certificate in hand, you can then apply for permanent residence to the federal government.

Study then work in Canada

Immigrants who worked and studied in Canada before getting permanent residency have shown to have a higher earning potential than those who come directly from abroad.

International students pay significantly more for tuition than Canadian students. Depending on the school you go to, and the study program you are in, you may be eligible for scholarship opportunities.

In order to study in Canada you need a study permit. It allows you to work up to 20 hours per week during the school year and full-time during academic breaks.

Certain programs will make you eligible for the Post-Graduation Work Permit (PGWP). This highly sought-after work permit allows you to work anywhere for any employer in Canada. It usually lasts as long as the study program, so a one-year study program can qualify you for a one-year PGWP.

If you do plan to take advantage of the PGWP, which is only available once in a lifetime, make sure you are enrolled in a program that will allow you to be eligible for it. Such programs are at least eight months in length and must be from a Designated Learning Institution in Canada. In addition, you must have studied full time during each academic session of the study program in order to use that experience toward the PGWP. There are also certain cases where international students may be ineligible for the PGWP.

There are two broad categories that Canadian work permits fall under: the Temporary Foreign Worker Program (TFWP) and the International Mobility Program (IMP).

The main difference between the TFWP and IMP is that the TFWP requires the Canadian employer to get what is called a Labour Market Impact Assessment (LMIA). In simple terms, the LMIA process is a way to prove that hiring a foreign worker will have a neutral or positive impact on the Canadian labour market.

That being said, the Global Talent Stream, which operates under the TFWP, is a work permit program that allows tech workers in certain occupations or who are hired at participating companies to get an expedited work permit. The employer does not have to do the advertising requirement of the LMIA, and so it gets processed much faster.

LMIAs are not needed for the IMP, because the program exists to promote Canada’s broad economic, social, and cultural policy objectives. This program is broken down further into categories such as Significant Benefit, and Charitable and Religious workers.

An example of an IMP program is the Intra-Company Transfer. This program is for key personnel in certain positions, who wish to transfer from their branch to a location in Canada.

Canada allows citizens and permanent residents to sponsor their spouse, common-law partner, children, or parents and grandparents. Canadians can only sponsor relatives like a brother, sister, aunt or uncle in specific circumstances. They cannot sponsor relatives who are considered criminally or medically inadmissible.

In order to be eligible to be sponsored as a spouse or common-law partner you must be over the age of 18, and in an ongoing, genuine relationship with a Canadian who can financially support you and any children you may have.

If your spouse or common-law partner is a Canadian citizen, they can sponsor from abroad. Permanent residents, however, must sponsor you from inside the country.

You, as the spouse, can be inside or outside Canada throughout the process. If you are outside Canada you will be processed as an outland applicant. From inside Canada, IRCC will process you as an inland applicant, and you may be able to get a spousal Open Work Permit.

The Parents and Grandparents Program (PGP) is a pathway to permanent residence for parents and grandparents of Canadians. The program currently operates like a lottery system, where there is a temporary intake window where IRCC accepts interest to sponsor forms. The immigration department then invites candidates to apply for permanent residence. An alternative option to the PGP is the Super Visa, which allows parents and grandparents to stay in Canada for up to two years at a time.

Canadians can also sponsor their biological or adopted children who are under the age of 22.

Discover your options for Canadian Immigration by completing our free assessment form.